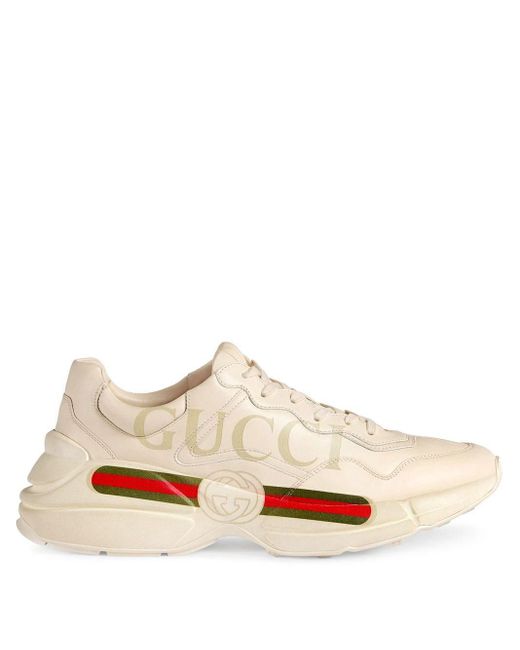 Free shipping with FARFETCH on orders over $250.
See more on FARFETCH

From the Saks IT LIST THE CHUNKY SNEAKER Get your kicks in the sole that stormed the runways. Buffed leather with glittered goldtone logo and signature stripes Leather upper Vintage Gucci logo Logo embossed heel Logo flag at padded tongue Padded collar Round toe Lace-up vamp Rubber sole Padded insole Made in Italy ABOUT THE BRAND First launched in 1921, the Italian luxury fashion house quickly became known for its fine leather craftsmanship and accessories. Under the helm of Creative Director Alessandro Michele since 2015, the brand's contemporary designs include shoes, clothing and accessories-often boasting the distinctive Horsebit motif. Gucci. Color: multicolor

When a fashion-savvy millennial or seasoned tastemaker wants to explore the chunky footwear trend, they reach for Guccis Rhyton sneakers. The exaggerated style was introduced in the Cruise 2018 collection but has already become an icon, coveted for its high-octane aesthetic and Italian-made construction. Whats more, the panelled leather sidewalls offer a perfect canvas for artistic embellishment – in this instance, a fusion of the Web stripe and Interlocking motifs. Leather.

You'll have to be quick to get your hands on a pair of Gucci's 'Rhyton' sneakers. Ever since the style first launched they've been a best-seller. This version has been made in Italy from cream leather and stamped with the same vintage logo as the label's cult T-shirts. The chunky layered sole references '90s kicks.

Designed with a thick sole and bulky construction, the sneaker has a retro influence in leather with a vintage Gucci logo inspired by prints from the 1980s. Ivory leather with Gucci vintage logo. Gucci logo tag. Debossed Gucci logo at the back sole. Rubber sole. 2" height. Made in Italy.

Set on chunky soles with paneled leather uppers, these gucci sneakers feature a version of the label's logo from the 1980s printed across the sides. Upper: calf leather, sole: rubber.

From LUISA VIA ROMA

Gucci's Rhyton trainers have a modern thick sole and the signature logo of the brand. 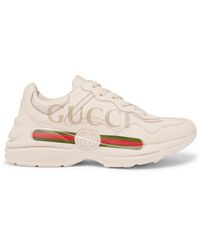 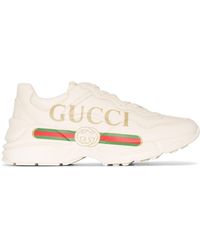