Caroline Flack’s Outfits Are the Real Winners of Love ...

Kate or Meghan:
Who Really Has the Most Influence on Fa ...

These Are the Five Best-Selling Styles of Summer Dresse ...

From Gucci to Off-White, Luxury Belts Are Driving Big S ...

These Three Statement Accessories Are Some of the Most ...

While we may be five days into Chinese New Year, celebrations at Nordstrom are still going strong. The retailer has opened a series of pop-up shops inspired by all things Year of the Dog. That means you can expect everything from clothing to accessories for men, women and children – as well as four-legged friends.

Open now through Sunday, March 25, Pop-In@Nordstrom Celebrates Year of the Dog has been curated by Nordstrom vice president of creative projects Olivia Kim. Alongside treats and fashion accessories for pets, the pop-ups are selling exclusive Peanuts merchandise in collaboration with a selection of brands including Champion, HEX and Pintrill among many more. 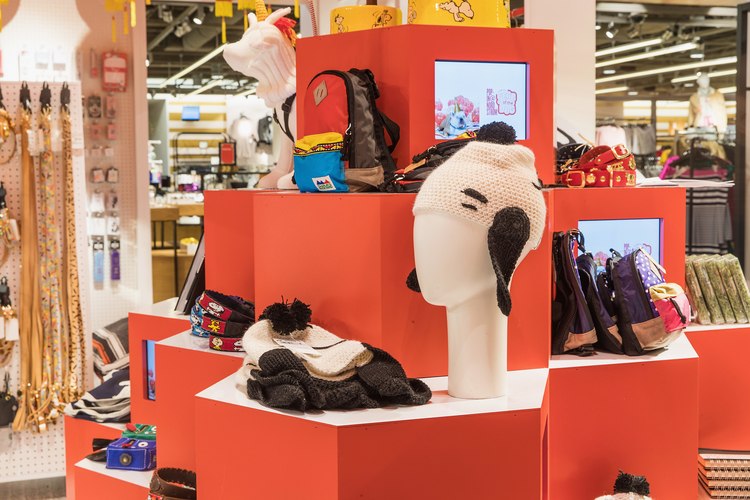 From coach jackets from the likes of Golder Bear and Champion to button-down shirts from Gitman and T-shirts by Daydreamer, the limited-edition Peanuts clothing combines graphics of the much-loved cartoon characters with casual silhouettes. Alongside the men’s and women’s clothing, Pop-In@Nordstrom is also stocking bags and tech accessories featuring Snoopy prints, and children’s accessories such as knitted crochet hats.

Available at eight locations across the USA and Canada, as well as online, the Snoopy lineup is complete with accessories for the home, gifts and stationery. What’s more, shoppers can find clothing, accessories and toys for pets, too. As explained by Olivia Kim, “We wanted to find the best of the best pet products out there. It’s everything you would want for the modern pet in your life that is not considered just a pet, but more of an actual family member. While it is the Year of the Dog, we wanted to make sure that we represented cats as well.”

Pop-In@Nordstrom was launched by the retailer in 2013 as a way to offer shoppers a new experience while being able to buy exclusive pieces. Previous partners have included The North Face, Alexander Wang and Opening Ceremony. Currently, Nordstrom also has a Céline pop-up shop at its Seattle store, where shoppers will find a curated edit of the Parisian fashion house’s SS18 collection alongside four exclusive products only available at the pop-up.

Caroline Flack’s Outfits Are the Real Winners of Love Isla ...

Kate or Meghan:
Who Really Has the Most Influence on Fashion ...

These Are the Five Best-Selling Styles of Summer Dresses Rig ...

From Gucci to Off-White, Luxury Belts Are Driving Big Sales

These Three Statement Accessories Are Some of the Most Wante ...

Chanel Shows Us How To Look Rich At The Beach